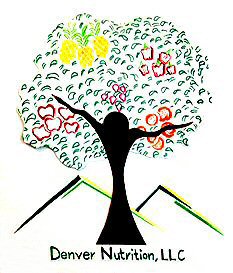 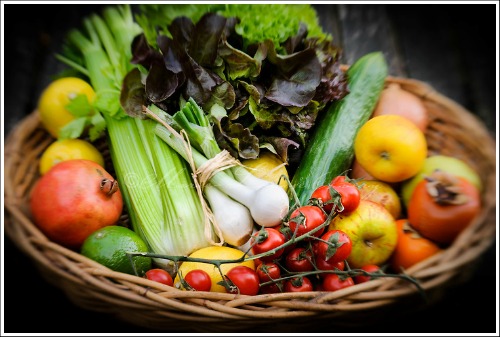 Organic Foods Really Are Better for You 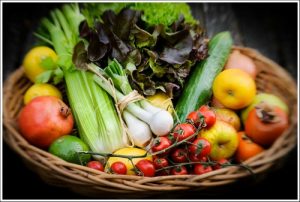 The benefits of organic foods have long been hailed, but a recent study proves the extent to which organics should form part of our daily diet. The study, published in the British Journal of Nutrition (BJN), debunked two previous studies that concluded that there was little difference in terms of health benefits between organic and conventionally grown produce. Scientists meticulously analyzed over 300 peer-reviewed publications regarding the nutritional content and safety of produce. They relied on sophisticated meta-analysis techniques to glean the difference between organic and non-organic produce.

Eat the Rainbow of Colorful Food

Eating a rainbow of foods including a variety of colorful fruits and vegetables is good for you. Consuming different color foods plays a role in confirming enough essential nutrients, vitamins, minerals, antioxidants, fiber, and more. 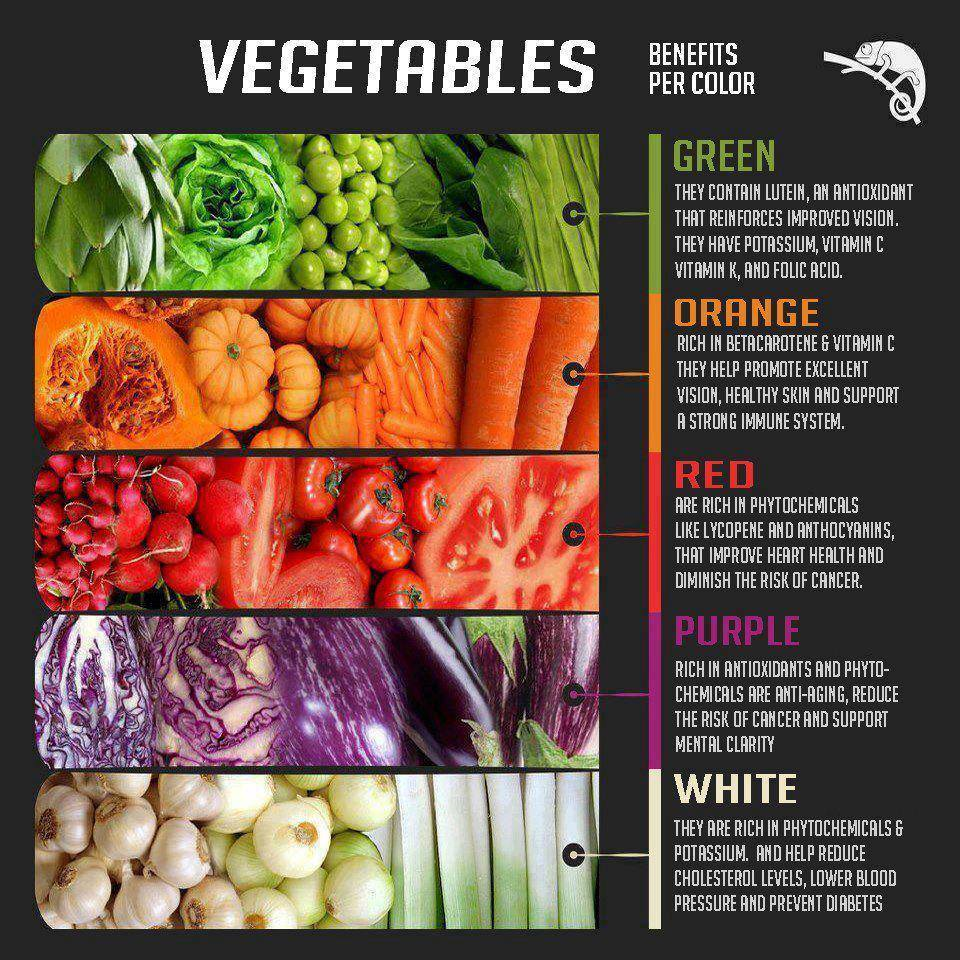 Organic Foods are Higher in Antioxidants

The findings showed that organic produce has between 18% and 69% more antioxidant compounds than conventional produce. The difference amounts to the antioxidant content of one or two of the five portions of fruits recommended for daily consumption. Organic produce has more polyphenols since, in the absence of pesticides, these compounds protect the plants against attacks from insects and pests. Polyphenols are abundant micronutrients in some foods that have been proven to keep degenerative diseases such as cancer and cardiovascular disease, at bay. They have powerful antioxidant properties that stop oxidative stress from resulting in disease.

Organic Fruits and Vegetables are Lower in Heavy Metals like Cadmium

The study also showed that organically grown crops contain less cadmium, a heavy metal that can build up in the kidneys and liver. Conventionally grown crops also have significantly more pesticide residues than organic crops (75%, compared to 11%). Scientists continue to disagree on the so-called ‘safe’ levels of pesticide residues. Many have espoused that some pesticides (for instance, those containing organophosphorus compounds) should be avoided altogether.

The study makes a strong point for the importance of prioritizing the quality of produce we purchase for daily use. Organic produce is not simply an important ally when it comes to preventing disease; it can also undo the ravages caused by periods of poor nutrition – as is experienced by those who have eating disorders or substance abuse issues. In top rehabilitation centers across the world, nourishing foods are considered an important part of recovery programs, to restore health to those who may been starving their bodies of vital vitamins and nutrients for months, or possibly years.

Organics the Key to Feeding the World Sustainably

Organic produce isn’t just a wise choice from a health perspective; researchers from Washington University claim that organic food is also the key to feeding the world sustainably. These scientists reviewed hundreds of published studies, finding evidence that organic farming can produce sufficient food, make a profit for farmers, and protect the environment against global warming and other major threats.

The review, published in the journal Nature Plants, is entitled ‘Organic Agriculture in the 21st Century’. It is the first study to review so many years of scientific research centered on the subject of organic vs conventional farming.

Organic Crops are ONLY 1% of the World’s Agriculture

Currently, organic crops make up only 1% of the world’s agriculture, despite increasing interest in the past couple of decades. Critics have long stated that organic agriculture is not feasible, because it requires more land to produce the same amount of food. However, they ignore the fact that organic produce is capable of bringing in much greater profits to farmers, owing to skyrocketing demand. People are willing to pay more for top quality, healthy produce that they know is free of pesticides linked to a host of diseases. Moreover, in times of severe drought, organic farms can produce greater yields, because of their high water-holding capacity.

Additional benefits wielded by organic farming include less soil and water pollution, fewer greenhouse emissions, increased energy efficiency (because no pesticides or unnatural fertilizers are used), better soil quality and superior biodiversity and genetic diversity. Insects and microbes on organic farms become more varied and the services they provide (during processes like pollination) improve the ability of farms to adapt to changing conditions.

Organic Produce for Your Family

If you wish to switch to organic food but are worried about increased cost, the first step is to shop locally, asking friends and acquaintances about local suppliers who sell their produce at a fair price. If you must prioritize produce, avoid foods on ‘dirty dozen’ lists, which always include foods like apples, celery, spinach, lettuce, and potatoes. Safer options when it comes to conventional produce include mangoes, eggplant onions, avocado, and cabbage.

Be Informed: Choose wisely…. the “Dirty Dozen” and the “Clean 15”

The Environmental Working Group (EWG), a nonprofit organization that advocates for policies that protect global and individual health, has published the 2014 version of the 12 foods having the highest pesticide load, making them the most important to buy organic versions. If you don’t want to buy organic foods, you can also opt-in for the 15 foods having the lowest pesticide load. 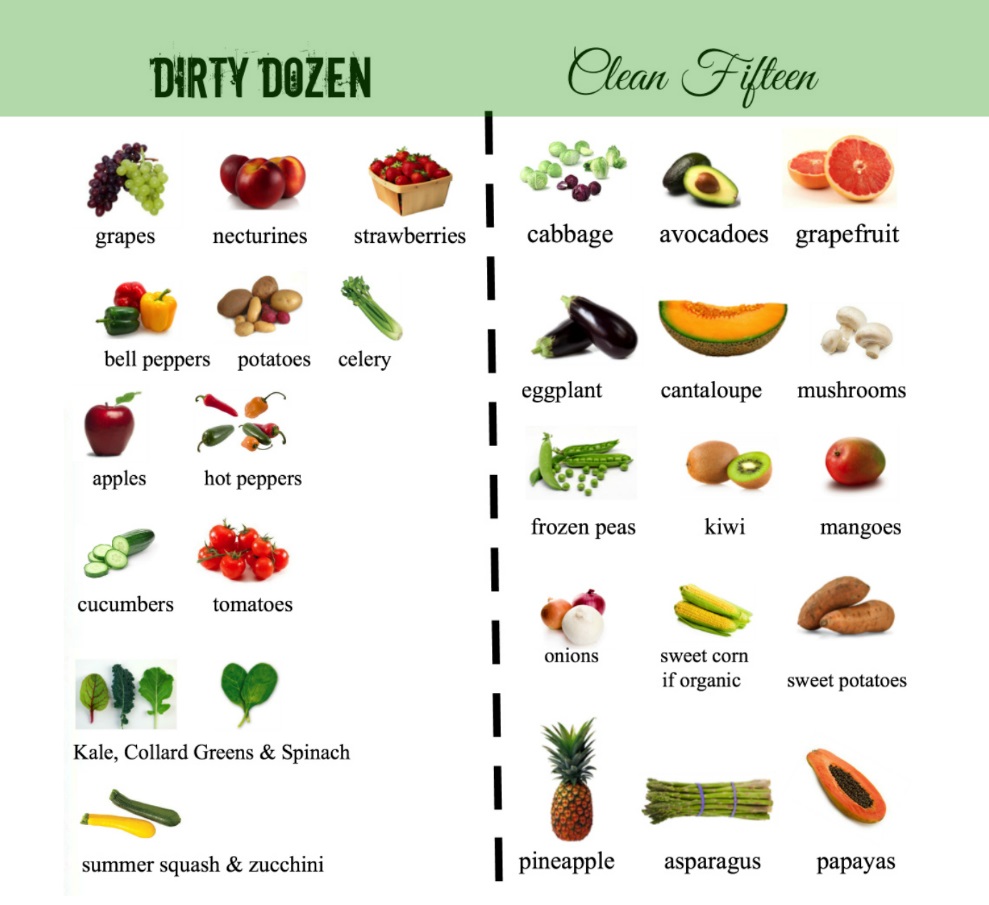 Organic food was the only option for thousands of years. Now, with pesticides, herbicides, fungicides, and GMO food, organic is still the best option. Need help with your choices? I would be honored to help.